Not a  particularly catchy blog title, but its been so long since I’ve posted I’m probably out of practise. 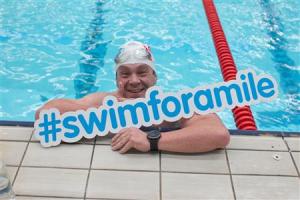 Dear reader, you might recall last year I embarked on an initiative from Swim Ireland called ‘Swim for a Mile‘, it was great and as the name suggests the main aim of the programme was to encourage people all over Ireland to pull on their togs, don the goggles and get into their local pool to swim a mile, or 1600 meters.

Well, it was back with a bang for 2015 and as I tend to do, I threw myself headlong into this for a couple of reasons.

1) I enjoyed it in 2014. Swimming is fun and over a relatively short period of time I became reasonably good at it.
2) After the back operation in January it was important that I could train regularly, get fit and strong but without putting too much strain on my body. Swimming is ideal for this.
3) I’ve signed up to compete in a half Ironman triathlon in August and in order to even get to the startline I will need to be able to swim 1900m in the sea. Swim for a Mile was the start of this journey.

Once the MOT on my back was signed off by the surgeon I embarked on a preset 12 week plan available directly from Swim Ireland. This was important. Those that know me know I like to be prepared, be there, do that, don’t argue and that’s the way it is. So if a coach from the national governing body for swimming in Ireland tells me I have to do something at a particular time for a particular distance then that’s right up my street.

12 weeks, 3 times a week, I drove down the road to the pool and did my sets. I continued my S&C (weights programme) from SSC Santry to strengthen my back and both disciplines complimented each other. By the last week of training I was doing 2000 meters. I hadn’t lost a huge amount of weight (about 7kg / 1stone – significant enough for 12 weeks I suppose) but I was fitter and more toned than ever before.

But most importantly I noticed two things. Firstly, I was more motivated than ever before. A ‘hard’ swim session lasts for the time you are in the pool, a few minutes afterwards and you will most likely not only recover, but you will feel better than you went in. A remarkable feeling and one I don’t think I’ve ever had after a run. Secondly, I was more motivated to train, too many times in the past have we all come in from work, had dinner and let that evenings session slip by and be forgotten. I can’t say it was easy, but once you made the decision to get up and go you never regretted it. I didn’t miss a single session through laziness through the whole programme. 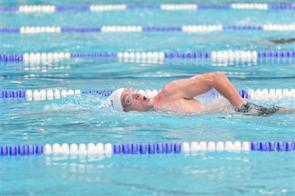 In 2014 I did the mile in about 34 minutes, but as this year isn’t about records (yea right!) I wanted to finish there and thereabouts. Into the National Aquatic Centre I went with its 50m pool of crystal clear water and there was 3 others in the lane. The first lad off at 4pm was a bit of a speedster, he wanted 22mins but would settle for 24! The second girl wanted about 35mins, then me at about 35 and finally a lady who wanted to finish in under 40mins.

Speedy Gonzales was zipping up and down like a boy racer on the M7 at 3am, weaving in and out, tumble turning like there was no tomorrow and generally being very man from Atlantisy. Girl No1 and me were pretty much together and Girl No2 was metronomic in her stroke, keeping up the rear like a pro.

I was nervous, 50m pools are not what I am familiar with and the expectation I put on myself to perform was becoming oppressive. My pressure, not anyone else’s. I went off too fast, testosterone zipping around my brain pretending I owned the pool. 3 lengths in and I tapped the toes of the girl in front, a universal ‘can I get past please’ signal. Arms and legs flapping I continued on but not feeling good. By length 5 I was passed out by the girl I had just passed and I was feeling pretty down. Tired, breathing out of sync and legs very heavy, I seriously considered pulling out, it was time to get the mind focused and distracted.

Think about my lessons, float straight, stretch out, glide and lift the elbow. Act like a sleek torpedo in the water was how Irish Times journalist, Dominique McMullen (@bobbleheadmo) described it. Stretch & Glide, Stretch & Glide. How is my watch doing, count up in lengths or count down. There goes the speedy guy around me again, how many times is that? Whats for dinner? When is my car tax up?

Time passes and I relax, I’ve no idea of time but I did learn throughout the training that even if you think you are relaxed and slow, your pace generally remains good. Every lane had a volunteer counting our lengths (thanks to the volunteers!) they gave our numbers counting down in 2’s so every number had to be doubled to give us a correct length count remaining! Plenty of time passed trying to work that out!

‘6’ she shouted, grand just 12 lengths left. ‘5’, I had caught up with the girl in front, will I pass and flop again? No stick on her tail and don’t make any move till I’m sure I can maintain it. ‘3’ then ‘2’ then ‘Last 1 – Go for it’, I can pass, but should I?, the only difference was her turns were efficient but I was much stronger down the straight. 75m to go I thought ‘its not really fair to pass now, she had been ahead all this time, would I be a jerk passing now?’. ‘Feck it, it’s not a race, we’re against ourselves and the clock’. Around I went, 50 to go, arms moving round like the wheels on a Mississippi paddle ship, but probably not so elegantly! 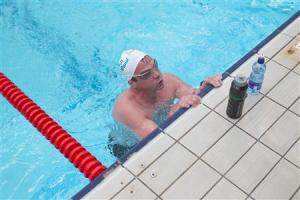 Touch the wall, Olympian Melanie Nocher on the microphone calling our times, 36 minutes. Damn, happy to have finished, disappointed with the time. Speedy guy stuck around to cheer us all in, we stayed for Girl 1 and Girl 2, everyone cheering and proud of not only our own achievement but the success of those in the lanes around us.

That’s what made Swim for a Mile so good, everyone who touched the wall after 1600 meters conquered their own Everest. It didn’t matter if you swam 25minutes, 52 minutes or more, we all started, did our best and finished. For some it was a mere training run, for others it was about conquering a long established fear. But no matter what level we were at, everyone finished with a smile.

PS: I did it all again the following day in my local pool, where I trained for the 12 weeks. 32min29sec – much bigger smile at the end of that one!

I'm a 40 something husband and dad who has lost lots of weight, finished a couple of marathons & triathlons and learned to enjoy life in the last few years.
View all posts by @killianbyrne →
This entry was posted in General, Race Reports, Training & Fitness and tagged Fitness, health, irish times, strength, Swim for a mile, swim ireland, Swimming, toning, Triathlon. Bookmark the permalink.