Another year, another blog post another injury. But this one is planned, kind of!

After first getting some back pain in November 2013 during a gym session, I worked through it and had what called a CT guided injection in the area. I’m not going to pretend I understand what the medical term was for what happened, but basically I had a disc in my back out of place, the disc was pressing on a nerve, causing pain & reactions like numbness & pins/needles down my leg. The injection relieved the pressure on the nerve and with plenty of specific exercises we were able to relieve about 70% of the effects of the injury.

Fast forward to October 2014 and after the Dublin Marathon the pain returned, big time. I was laid low with it again in December, so much so that I nearly called an ambulance the pain was so bad! Off to the Doctor, MRI scans done, appointment scheduled for surgery on a ‘prolapsed disc’ and that brings me to January 2015.

Operation over, stitches in, bandages on and 90% of the symptoms have been immediately relieved. The physics recommend a 6wk recovery period before I’m allowed start training again. Between now and then it is rest, recover and take some short walks a couple of times a day to slowly build up the strength.

I was really encouraged to notice while in hospital that, despite not training since the marathon in October, I was still registering a heart rate of around 54bpm and my blood pressure was well within normal tolerances.

So, after the 6 week ‘layoff’ the plan is to start a specific S&C managed training programme in the Sports Surgery Clinic with a view to specifically strengthening the back and surrounding muscles. That’s when I’ll start thinking seriously about the Dublin half Ironman in August. 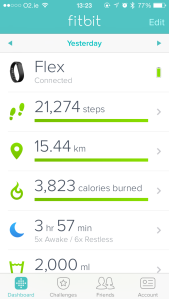 So that’s where we are right now. Me, Stan the dog and Marlay Pk. working our way back to fitness! I’m enjoying the walking a lot actually me & Stan are out a couple of times a day for about 15 or 20 minutes at most. I have my Fitbit, we’ll put on the runners (and coats and hats and scarves if this weather continues) and head out to hit the targets. The aim is to hit at least 15,000 steps a day, every day. Which is 50% more than the recommended (minimum) daily target.

If this gets enough likes I’ll lash up a picture of the stitches too!

I'm a 40 something husband and dad who has lost lots of weight, finished a couple of marathons & triathlons and learned to enjoy life in the last few years.
View all posts by @killianbyrne →
This entry was posted in Uncategorized and tagged 2015, back pain, Fitness, health, Injury, Ironman, Marlay Pk, prolapsed disc, resolutions, Triathlon, walking. Bookmark the permalink.

1 Response to Danger, Man at work…