I’m back from holidays, or warm weather training as I like to call it. With six weeks to the Vodafone Dublin City Triathlon training has been adequate, if not exceptional.

We work hard to get three weeks away as a family each year and France beckoned once we could get the kids out of school.

Now that my wife has taken up triathlon our car looked like it was playing support on ‘Le Tour’ with two road bikes added to the four family cycles we traditionally bring. But years of playing Tetris stood to me as six bikes, regular holiday stuff and enough triathlon kit to last three weeks training and a race worked its way into every nook and cranny we could find between the seats!

A camping holiday lends itself to allowing us to train while away, the kids enjoy going into camp for a couple of hours each day leaving Maureen and I with some free time to head off and do whatever is on the plan for the day.

But best laid plans invariably fall apart and the weather just wasn’t playing ball! With us staying on the Atlantic coast, the sea was just too rough to get some decent, safe time in the water and severe periods of rain and thunder put paid to our plans to cycle and run too.

Now, at home I probably would have gone out, but not while away – it was a holiday after all and having to endure a training session as opposed to enjoying it is taking things a little too far!

There was positive news though, as there is an international triathlon on in the town where we stay and well, when in Rome (or France…). 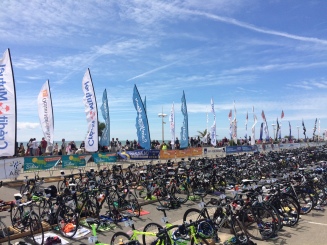 The weather was fine and the race was great. A calm 500m sea swim, 20k draft legal bike (drafting isn’t allowed in in Ireland but is in France, racing along at 45k/hr only inches between a bunch of 15 bikes in your group is a sensation to behold) and finally a 5k run in 24 degree heat brought the day to a close.

I know that racing while on holiday may not be everyone’s cup of tea but I find it fun, it adds to the training and there is plenty of guilt free ice cream at the finish! I finished strong and I finished faster than last year so I’d call that a result!

The days on holidays passed, the weather got better and the training got more ad hoc as the time went on. Plenty of running and bike, but not so much swimming. I’m nervous enough as it is about the swim, and not getting enough time in the water (do aqua parks & pool slides count?) has my anxiety levels getting just a little higher.

But I’m not one to moan for too long. We have to play the cards we are dealt and I am happy enough that having done plenty of lengths in the pool I can swim well.

There is lots of time to get some open water practice in now we are home and I’m going to get stuck back in to things immediately. DCT is a good swim too, calm, not too cold and being river-based no salt water to sting the eyes!

It’s great seeing the videos & stories coming from other DCT competitors coming out on the Facebook and Twitter feed, and now Sonia O’Sullivan is getting involved too – there’s not many can say they’ve raced an Olympian!

*Note – I was offered an entry to DCT to write a couple of blogs about my training into DCT 2016. As I had already entered I turned down the offer but agreed to write the blogs anyway.

I'm a 40 something husband and dad who has lost lots of weight, finished a couple of marathons & triathlons and learned to enjoy life in the last few years.
View all posts by @killianbyrne →
This entry was posted in General, Training & Fitness, Triathlon and tagged Dublin City Triathlon, Exercise, Fitness, Jean de Monts, training, Triathlon, Vodafone. Bookmark the permalink.